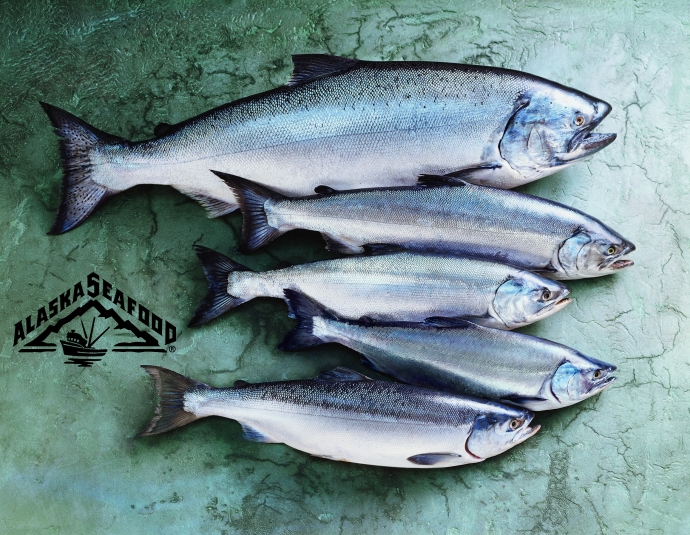 Farmed Salmon
There are four types of salmon, produced in fish farming: Atlantic salmon (Salmo salar), rainbow trout (Oncorhynchus mykiss), coho salmon (Oncorhynchus kisutch) and chinook salmon (Oncorhynchus tshawytscha). About 90% of farmed salmon accounts for Atlantic salmon.
At present, there are three types of farmed salmon on the Ukrainian market: Atlantic salmon, produced in Norway, Scotland, Ireland, Chile, or the Faroe Islands, rainbow trout, also produced in different countries (Norway, Denmark, Chile, etc.), and coho salmon, which it is produced mainly in Chile. Wild Atlantic salmon fisheries are limited. Volumes of farmed coho salmon also exceed wild catches of this species.
Wild salmon
Wild salmon includes: pink salmon (Oncorhynchus gorbuscha), chum salmon (Oncorhynchus keta), sockeye salmon (Oncorhynchus nerka), chinook salmon (Oncorhynchus tshawytscha), coho salmon (Oncorhynchus kisutch). They are commercially harvested in the USA (Alaska), Canada, Japan and Russia. Since 2015, Ukraine has not imported fish from Russia, thus, the wild salmon is mainly imported from Alaska.
Most wild salmon species cannot be produced in fish farming due to their life cycle. Alaska salmon is anadromous (migratory) species. That means that they spawn in fresh waters, then the fry migrates to the ocean. There they spend 1-5 years depending on the species and return to freshwater for spawning. Salmon always returns to the same stream where it was born. It spawns there and dies after that.
This life cycle is the reason for the season of wild salmon fisheries: the fish is harvested when it spawns during 3-4 months, from July to September. In Alaska the fish is frozen within a few hours after being caught and available frozen all year round. Alaska industry invests a lot of resources into developing freezing technology. Mostly, the flash freezing technology is used. This technology does not allow the damage of fish meat cells.
Wild Salmon Catch in Alaska (2006-2015):
Pink salmon - 65% of the catch of all wild salmon. This is the smallest of the Pacific salmon with the shortest life cycle. In Ukraine, it is the most inexpensive type of wild salmon. Pink salmon roe is also well represented in Ukraine.
Sockeye salmon - 23% of the catch. Sockeye salmon has the bright red meat. The color is completely natural due to the diet of sockeye salmon.
Chum salmon - 9%. The meat is pink, with a firm texture and a mild taste.
Coho salmon - 2%. Delicate orange-red meat with a delicate taste.
Chinook salmon - 1%. The biggest, fattest, and most expensive wild salmon species. In Ukraine, it is difficult to find.
Wild Atlantic salmon and rainbow trout: limited catch volumes, not represented in Ukraine.
If you want to buy wild fish, you may consider pink salmon, chum salmon, sockeye salmon and chinook salmon, as coho salmon can be both wild and farm.
This article was developed by the Alaska Seafood Marketing Institute with the help of Viktor Sagaidak, GoodWine Fish Specialist, goodwine.ua.