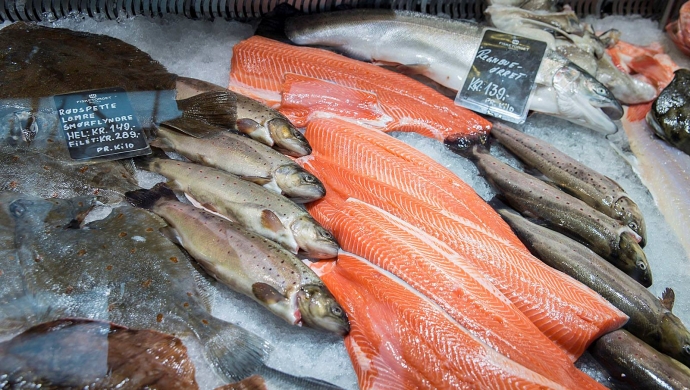 The ratio of imported and domestic fish

At the same time, it should be taken into account that, unfortunately, our state can not accurately say how many fish are actually grown and harvested in Ukraine. Market participants, like representatives of the State Fishery Agency, note that the official figures do not reflect the real picture and they can be multiplied by 2-2.5 times (ie up to 200,000 tons), since a significant part remains in the shadows. Accordingly, theoretically, the ratio of imported and domestic products can be 60/40. But then another question arises: how many Ukrainian fish get to our counters?

At the same time, if we only talk about sea fish, then the ratio of imported and domestic fish products will be even more not in favor of the latter.

According to the State Fish Agency, fishing in Ukraine's water bodies in January-September 2017 amounted to 35,200 tons, including:

Also, Ukraine is catching in the ocean, which for this period amounted to 7,900 tons. Accordingly, the volume of marine products as such was 25,700 tons.

Accordingly, 88% of marine fish products are imported and only 12% are domestic fish.

Structure of imports and consumer preferences

What exactly imports Ukraine and what consumer preferences of Ukrainians?
Here is the TOP-5 of imported products (% of total imports):

If we start from official data on imports, domestic production and official data on the number of people in the country, we will get an average consumption of about 9 kg per person per year. At the same time, most fish consumed in the following 5 areas:

Outsiders of fish consumption are the following regions of Ukraine:

In general, the volume of imports in 2017 almost coincide with the volume of imports in 2016. The statistics do not yet include data for November and December 2017, but they are unlikely to be significantly higher than 30-35 thousand tons for each of these months, so imports for 2017 should not significantly exceed the figures for 2016 (300,000 tons), although 3-5% of import growth remains.

On the one hand, such relative stability and lack of growth may indicate that we will not return to the indicators of 2013, when fish products were imported to 450,000 tons. But on the other hand, we must consider the following.

Thus, official data according to which 42 million people live in Ukraine, obviously, may not correspond to reality. In addition, as noted by many experts, in the medium term these trends will continue and the population will continue to decline, and the nation will grow old. Therefore, it must be taken into account when analyzing the market and its prospects.

In this regard, the preservation of import volumes and consumption volumes in a fairly difficult socio-economic time for the country, in the absence of any support from the state, is certainly a positive moment and merit of all participants in the fishing industry.

Despite the fact that Ukraine remains dependent on the import of fish products, it should not be taken as a minus. And that's why.

The experience of neighboring countries shows that even without the availability of their own sufficient bio-resources, the fish industry can successfully develop, bring significant dividends to the country's budget and employ citizens.

For example, we will analyze the fishing industry in neighboring Poland.

In 2014, 456,000 tons of fish products were processed in Poland (369,000 tons were processed in 2010) for a total value of USD 2.3 billion, while the revenue was 500 million euros.
What is most interesting, 90% of all processed products are exported, of which 59% goes to the German market, the rest to the markets of Great Britain, France and Denmark.

It should be noted that there are several VAT rates in Poland. There is a basic VAT rate of 23%, and there are also reduced VAT rates: 8, 5 and 0%. The VAT rate for fish in Poland is 5% (as with most other food products). Of course, this plays an important role in stimulating the processing of fish products in Poland.

Summarizing, we can say that in the long term Ukraine has a chance to become a serious player in Europe in the fish processing market. Every year, the demand for fish products is growing. Already, the average consumption of fish in the world has exceeded 20 kg per person per year. And these figures were achieved due to aquaculture since traditional fishing has not been growing for the last 20 years. For example, over the past year, 1.3 million tons of salmon were grown in Norway, while a few tens of years ago this figure was 50,000 tons. According to the Minister of Fisheries of Norway, Per Sandberg, by 2050 Norway plans to increase this figure to 5 million tons. And then the question arises, why should Ukraine not take this opportunity and not become at least a second fish processor in Europe?