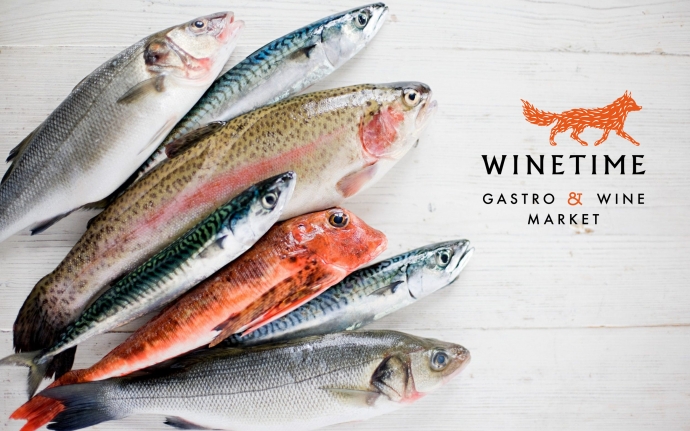 Aquaculture vs Wildlife
Is farm-raised fish safe? Is wild fish really more nutritious than its farm counterparts? Is aquaculture really an environmentally sound way to catch fish? There are many more pitfalls in these matters than it may seem. Here's what we managed to fish:
- Although 70% of the planet is made up of oceans, only about 2% of the world's food supplies come from the seas.
- According to World Bank forecasts, by 2030 about 62% of the seafood we will eat will be grown on farms.
- For more than 2.9 billion people, fish provide 20% of their animal protein intake.
In the store or on your plate, wild and farm fish may look the same, but this does not guarantee their equivalence. And that's why.
1. Farmer vs Wild: a fundamental difference
Aquaculture
This is a commercial breeding of aquatic organisms - fish, crustaceans and mollusks in specially equipped reservoirs, marine plantations and large reservoirs, in fact - fish farms. Remember the predictions? Today, more than 50% of seafood consumed by humans is grown on farms. 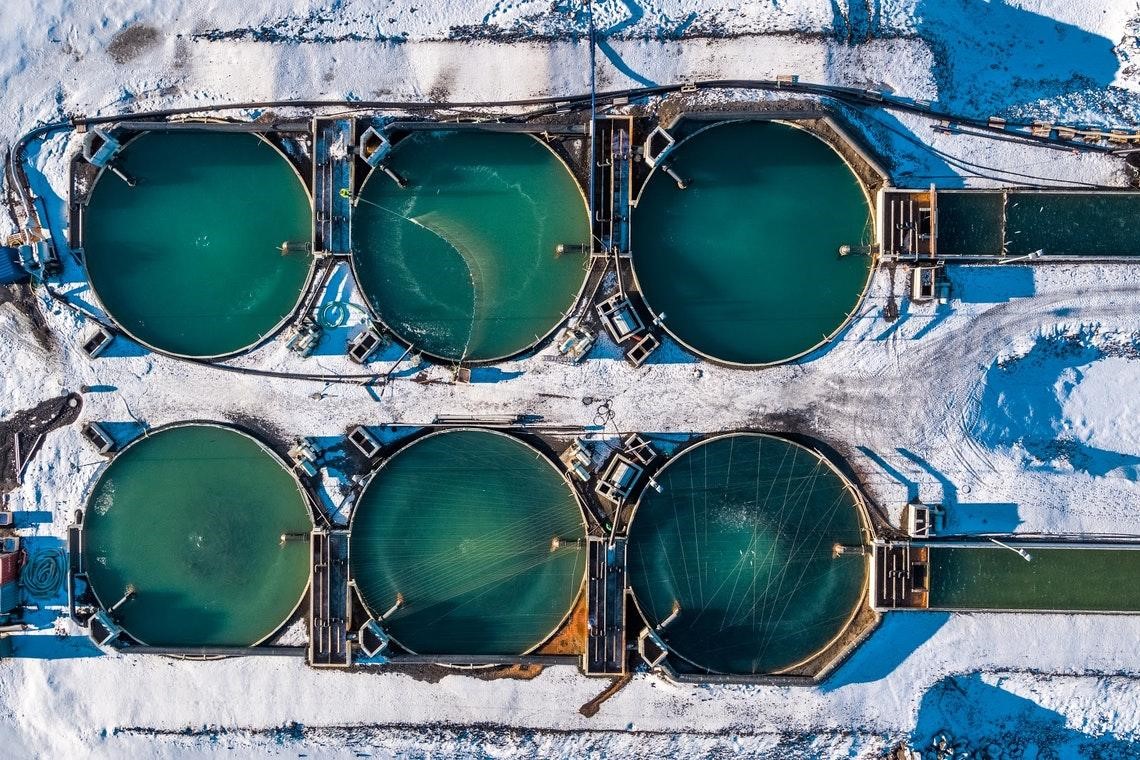 Wild fish
Fish caught in their natural habitat - lakes, oceans, rivers and more. The main advantage of such fish - in its diet and exercise - that is, in the variety of food and freedom of movement. In addition, fish caught in the wild do not contain antibiotics and have a lower risk of disease and infection.
2. Farm vs Wild: nutritional value
Fish, no matter where it is caught, has a record content of useful acids: it has little saturated fat and many legendary omega-3, which are so much talked about. What it is?
Our body is not able to synthesize the necessary amount of omega-3 fatty acids, which are responsible for energy generation, reducing inflammation, improving vision and cognitive function of the brain, so we compensate for the lack of fish. Regardless of the type and method of catching, seafood is a unique source of these essential acids.
There is a myth that the nutritional value of wild fish is higher than that of farmed fish, and in general - wild, so "natural", so healthier.
Not necessarily. 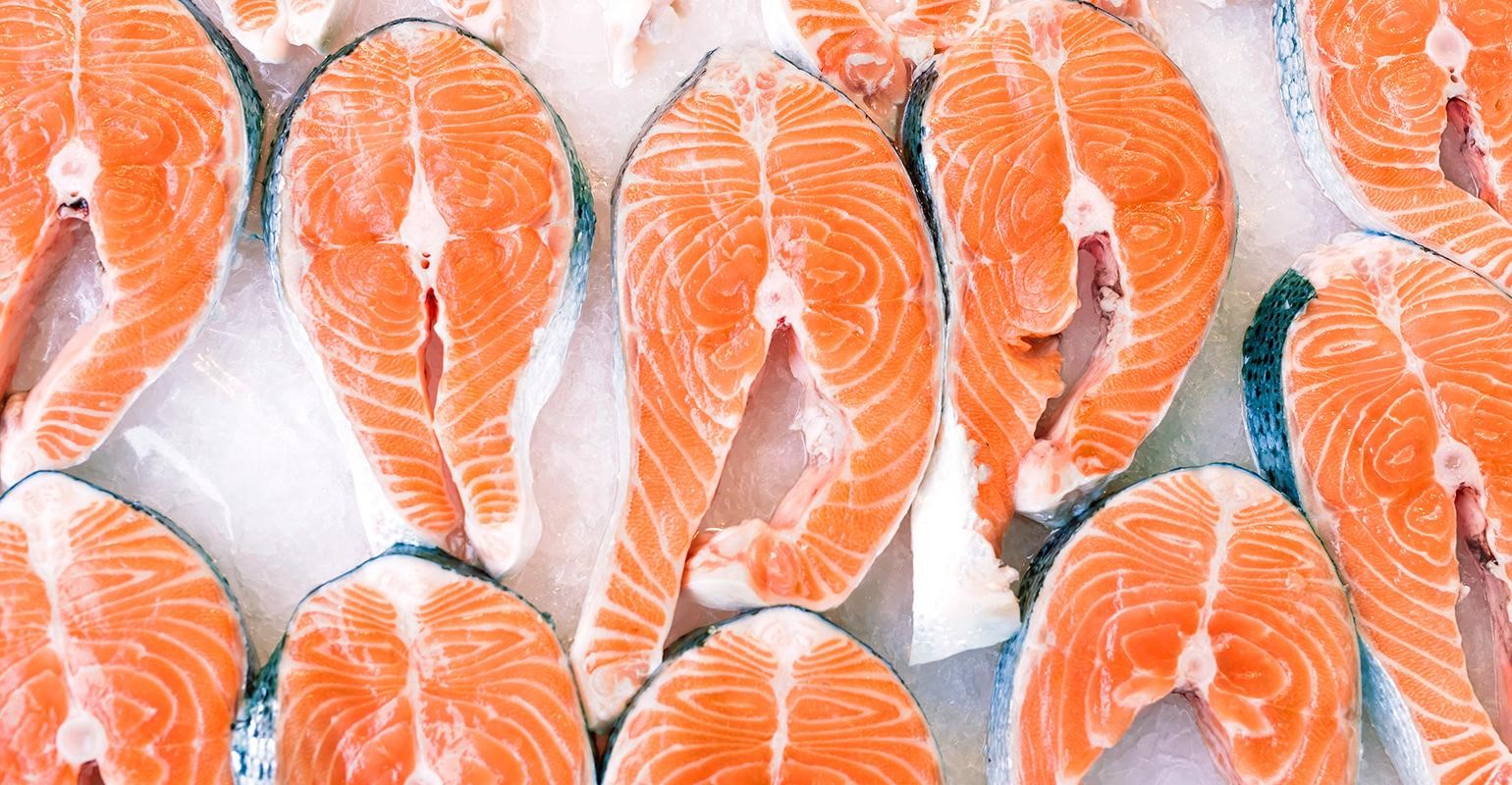 Pay attention! Despite the differences, both farm and wild fish are safe and wholesome to eat and have their advantages and disadvantages (depending on which camp you are in).
Consider the example of salmon:
Farm salmon is 46% more caloric, fortified with vitamin C and wins over saturated, polyunsaturated and omega-3 fatty acids. This promotes oiliness, retains moisture during cooking and the meat is usually softer.
Wild salmon, in turn, contains more minerals, vitamins B and D, potassium, zinc and iron. It has fewer calories and less saturated fat, so if you are looking for the most dietary option - this is it.
It is believed that eating at least two servings of fish or shellfish a week reduces the risk of heart disease and delays the onset of Alzheimer's disease and dementia.
3. Farm vs Wild: the color of mood
The color of a fish, wild or farmed, depends on what it eats. Yes, the wisdom "you are what you eat" works in the animal world as well. Therefore, the color of salmon, for example, can vary from pale pink to orange - relative to his diet. Wild salmon usually feed on krill, crabs, shrimp and other ocean dwellers, which contain the chemical compound astaxanthin, which turns the meat pink. Atlantic salmon naturally has a pale orange hue, and sockeye salmon has a dark red hue.
However, if you see a dull or very gray fish, it may be a sign that it is not the first freshness.
MYTH: A synthetic dye is used to color farm fish.
Salmon grown in aquaculture also receives astaxanthin, but not from synthetic dyes, but feed.
Neither natural nor synthetic versions of astaxanthin are harmless to humans. 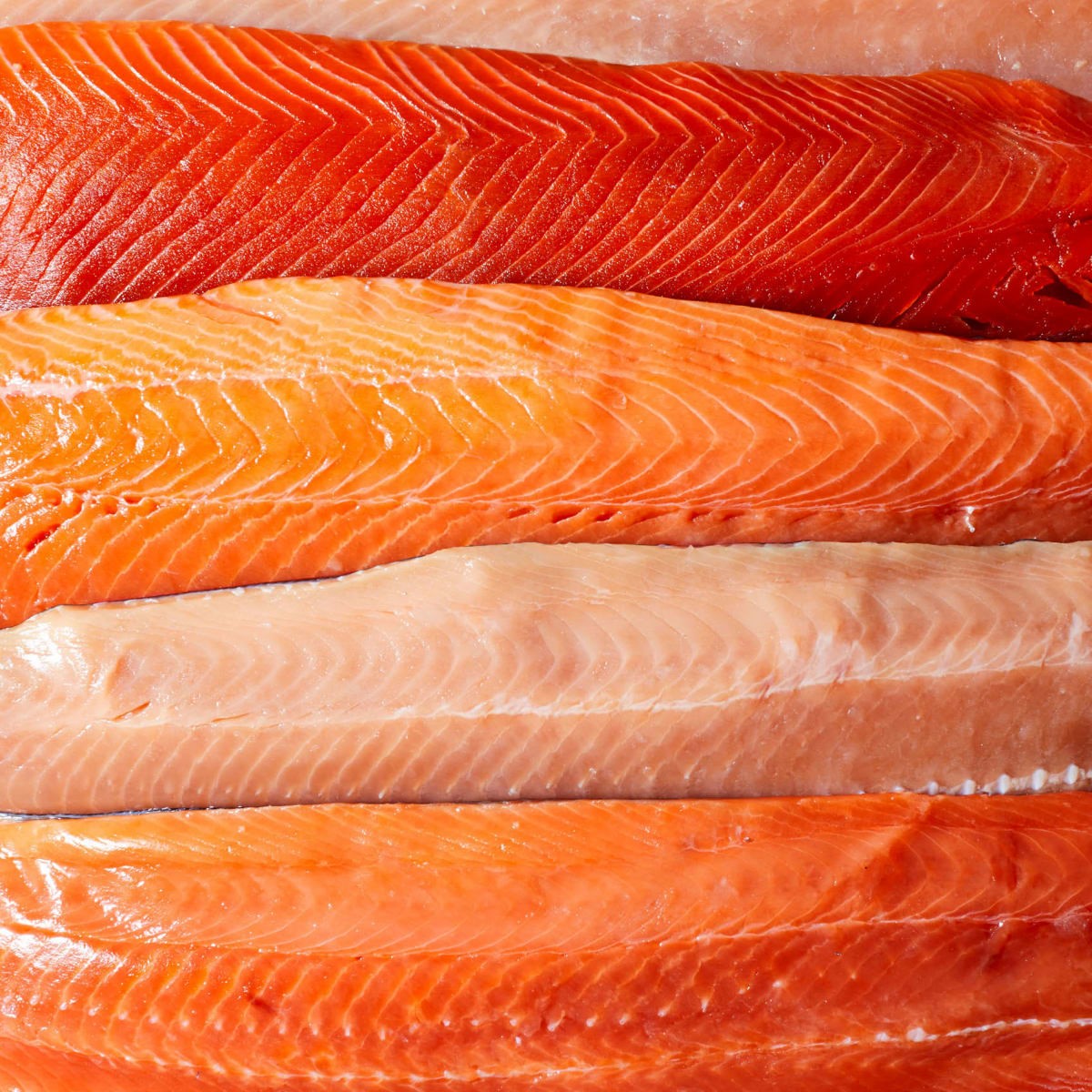 4. Farmer vs Wild: benefits and harms
One of the most popular contaminants in fish is mercury. But let's be clear: dangerous amounts of mercury can potentially be found only in certain species of large fish, such as sharks, swordfish, king mackerel or marlin. Catfish, tilapia, salmon or any other fish caught on the farm have low or very low levels of mercury, not to be feared.
MYTH: Fish caught in the wild contain fewer harmful substances and chemicals.
We don't want to upset you, but the fact that wild fish is not 100% exposed to antibiotics and compound feed does not guarantee that it is necessarily "healthier".
Fish can absorb chemicals and contaminants through food and the environment as well, and here farm fish have a significant advantage - full control offered by aquaculture. We can't know where the wild fish swam and what it ate - but we know for sure in aquaculture systems.
For these reasons, it is recommended to choose fish from the farm for cooking sushi and raw fish dishes.
5. Farming vs Wild: ecology and environment
For many years, fisheries have been synonymous with pollution and mistreatment of ocean wildlife. Techniques such as the use of open baskets with nets placed in the ocean can lead to the leaching of chemicals and diseases into the ocean, putting ocean dwellers at risk. In addition, it is known that farmed fish escape from the pens, which means that it mixes with wild fish. It doesn't sound so bad, but farmed fish are at greater risk of contracting diseases and parasites, and as a result they are regularly fed antibiotics, which is not very good for the natural fish population.
And although fish farming exists precisely to prevent overfishing of wild fish, its populations are depleted as a result of both climate change and consumer demand. It is gratifying that environmental friendliness is now in vogue, and aquaculture follows it. Fish caught in the wild are also not completely free from environmental errors. For example, many fishing operations do not take environmental issues into account at all.
So, on the one hand, the ecosystem and other fish species suffer from wild fishing. On the other hand, fish farming methods pollute water and can threaten local flora and fauna. It all depends on who is engaged in fishing and / or agriculture. We believe that eventually all people will come to both conscious consumption and conscious production.
6. For fish - money: price and availability
As you can imagine, farmed fish is usually cheaper than fish caught in the wild, primarily because the elements that are beyond human control are much less uniform.
Wild fish, as members of the fauna, do not have a standard size or diet, and supply is limited due to changes in a number of factors - algae blooms, fishing seasons and spawning cycles - all of which can significantly affect the price.
Farmed fish have more predictable parameters, which allows you to sell fish at a constant price. Scientists can even predict when fish will be ready to be caught, as well as find out when it is appropriate to increase production to meet consumer needs.
Affordability is one of the key factors in pricing. The more difficult and expensive the catch - the higher the market price. 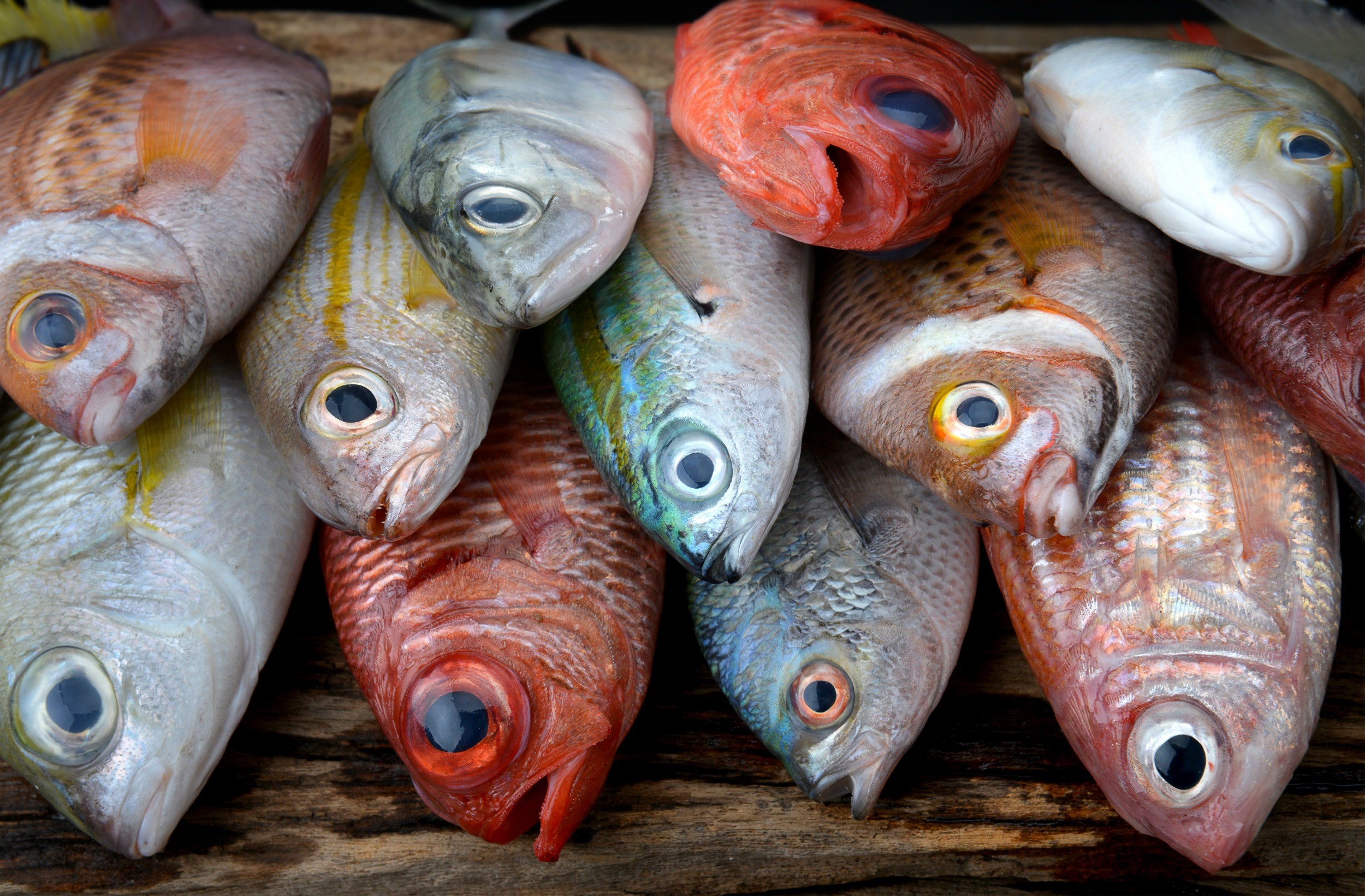 So, as you can see, the finale remains open.
We, for our part, came to the conclusion that regardless of the method of cultivation, a little fish is still better than none. In other words, the facts (and experience) show that the difference in taste, nutritional value and potential harm is minimal.
Therefore, we advise you not to postpone plans for later and arrange a wine and gastronomic evening today.
Take a bottle of Loire Rose, such as Bougrier Rose d’Anjou, and cook grilled salmon with rosemary in mint sauce. Whether you prefer farmed, omega-3-enriched or dietary wild - the choice is yours. In any case, it will be gastronomic, unusual and delicious.
Not only fresh salmon, but also cold and hot smoked fish, cod, beluga, tilapia, oysters and other seafood you can always find in WINETIME stores:
m. Kyiv:
Bazhana Ave., 1e
Sobornosti Ave., 7b
Parking, street Land reclamation, 1/3
Vinnytsia, street Architects, 5
Rivne, street Mickiewicz, 32