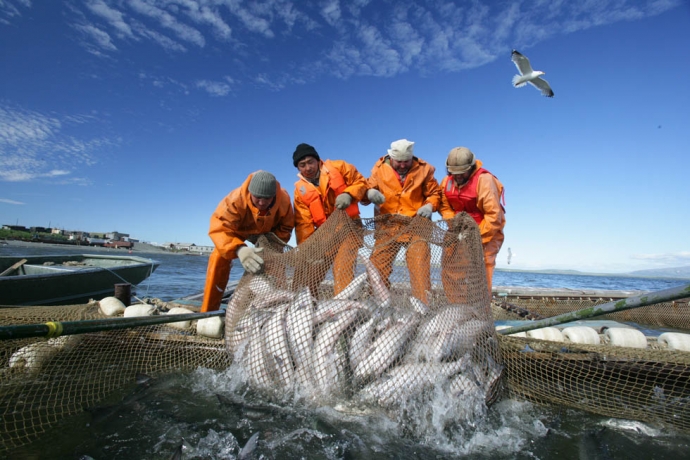 Fishery has its own geography. Between the oceans, fish catch and seafood production are distributed as follows: 64% of the Pacific Ocean, 27% of the Atlantic, and 9% of the Indian Ocean.
The global volume of fisheries production in marine waters in 2014 was 81.5 million tons, which is somewhat higher than in the previous two years. However, global trends in the field of marine fishing are usually analyzed after subtracting the catch of the Peruvian anchovy (Engraulis ringens). This is due to the high degree of dependence of the anchovy catches on the El Niño phenomenon - the figures for its catch are very large, and most of the catch is not used by people for food, but is processed for fish meal.
Since 1950, the global catch without anchovy has grown until 1988, when it exceeded the boundary of 78 million tons. Subsequently, the catches stabilized, albeit with some fluctuations.
From 2003 to 2009, catch rates remained exceptionally stable: annual fluctuations never exceeded one percent in absolute terms. Finally, since 2010, global catches have started to grow gradually, until in 2014 they reached a new maximum of 78.4 million tons without taking into account anchovy.
In 2014, 13 of the 25 main fishing countries increased their catches by more than 100 thousand tons compared to 2013. The most significant growth was in Indonesia, China and Myanmar in Asia, Norway in Europe and Peru and Chile in South America.
The catches officially declared by China in other regions, in addition to "Area 61 - North-West Pacific", increased from 586 thousand tons in 2013 to 880 thousand tons in 2014 due to the increase in the catch of cephalopods (in the South Atlantic and in South Pacific), krill (in the Antarctic), and in the area of ​​61 they increased by 550 thousand tons. At the same time, part of the catch of China's commercial fishery reported in Area 61 may come from other areas, because according to national statistics, catches in the expeditionary fishery, to which China also includes fishing in the area of ​​61 outside the China's EEZs, have grown from 1, 35 million tons to more than 2 million tons in 2014.
In 2014, the anchovy catch in Peru fell to 2.3 million tonnes, half as much as in 2013, and least after the culmination of the El Niño phenomenon in 1998 - but in 2015 they recovered and exceeded 3.6 million tonnes . Nevertheless, in 2014 Peru catches of all other species reached the highest level since 2001, with a significant share of such valuable species as Humboldt squid, hake and shrimp.
Unlike Peru, in Chile in 2014, anchovy catches kept at 0.8 million tonnes, but the catch of all other species increased, reversing the trend since 2007 to reduce them. For the first time since 1998, anchovy has lost the place of the most commercial commercial species, having conceded its pollock. Despite fairly stable trends in global catches, indicators for one of the main commercial species have undergone significant fluctuations over a number of years.
In the Atlantic Ocean and the adjacent seas, the catch of Atlantic herring (Clupea harengus) declined by one third between 2009 and 2014, while the catch of mackerel (Scomber scombrus) doubled. The herring catch decreased by the three largest fishing countries (Norway, Iceland and the Russian Federation), and all countries fishing in the northeastern Atlantic significantly increased the catch of mackerel. The fishery for this latter species is also currently being conducted in the EEZ of Iceland and Greenland, where no significant catches were previously recorded. Perhaps this was the result of climate change, although this theory needs further research at the local level.
After significant recovery in the period 2009-2013, catches of Atlantic cod (Gadus morhua) in the northeastern Atlantic stabilized at about 1.3 million tons, but in the northwestern Atlantic they remain very scarce and more than 70 thousand tons after a sharp decline in the early 90's.
In the northern part of the Pacific Ocean, the catch of saury (Cololabis saira) and Japanese blue crab (Portunus trituberculatus) has increased significantly. With regard to the latter, in addition to the increase in catches by other countries, information on China, derived from an additional source, was made for the first time in the FAO database.
In 2014, record catches were recorded for four very valuable groups - tuna, lobster, shrimp and cephalopod mollusks. The total catch of tuna and tuna species amounted to almost 7.7 million tons. The catch of striped tuna exceeded the level of 3 million tons, and the yellowfin tuna has almost returned to the level of 1.5 million tons achieved in 2003 and 2004. Catch of long-tuna and swordfish remained at the same level as, for example, and big-eyed tuna, although 80 thousand tons less than the peak 0.5 million tons in 2004.