Alaska Pollock lives a wild existence and eats a natural diet. In other words, it is a completely natural product. It’s also a healthy one: Alaska Pollock is high in protein, low in fat, carbohydrates and cholesterol, and an excellent source of protein and minerals.
The BBC reported that a scientific study ranked Alaska pollock as the 17th most nutritious food in the world when comparing nutrient composition of over 1,000 raw foods and how well they satisfied daily nutritional requirements. Just to compare mackerel ranks the 66th, herring – 43rd, Atlantic cod – 33rd.  For a complete list of the top 100 most nutritious foods, visit the BBC article here.
As you can see on the graph, it contains more protein than chicken, pork or grounded beef, but the content of fat and specifically saturated fat is much lower. Beside, choosing Alaska Pollock you may consider that it is the so-called low impact protein source. It means that ecologically there are less consequences for the nature because of the wild fish production compared to other protein products, as there is no soil loss, no fertilizers or pesticides or antibiotics are used, and very low water use.

It is a great addition to a healthy diet, providing 344 milligrams of omega-3 fatty acids per 100 g serving, which is twice more than, for example, the same amount of cod. 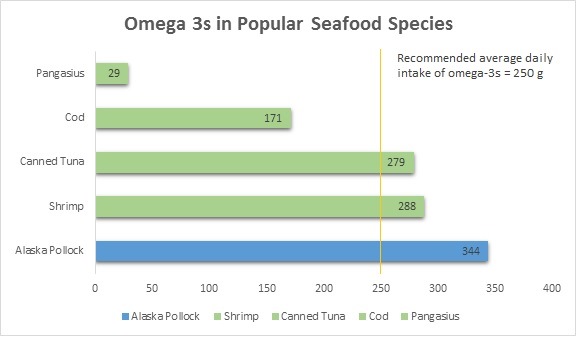 One more advantage of Alaska pollock is its affordable price. When buying, it is important to pay attention to the fact that Alaska pollock was flash frozen, so the structure of fish is less damaged, and the health benefits and perfect taste are conserved.
The State of Alaska Department of Environmental Conservation regularly tests Alaska seafood for the presence of environmental toxins, such as polychlorinated biphenyls (PCBs) and heavy metals, such as mercury. In all tests, Alaska pollock received a clean bill of health, with extremely low amounts of contaminants – well below the levels of concern set by the U.S. Food and Drug Administration. Alaska public health officials recommend unrestricted consumption of Alaska pollock for everyone, including pregnant and nursing women and young children.
How to choose pollock?
Give preference to dry freeze pollock fillets or pollock briquettes, then during defrosting, the process of which should take place at the minimum positive temperature (preferably in the refrigerator for several hours), you will have a minimum of water at the exit, and the fish meat will retain its structure and maximum of its nutritious properties.
Prepared by the Alaska Seafood Marketing Institute.
More information: eeu.alaskaseafood.org and alaskaseafood.org
#AskForAlaska #AlaskaSeafood