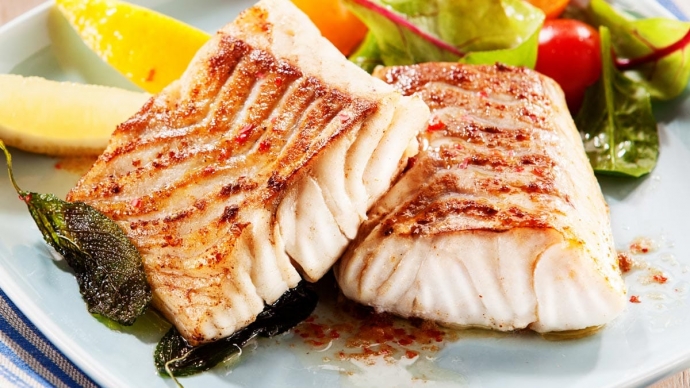 Pollock (Latin name Theragra chalcogramma, international name Alaska pollock) is a bottom-pelagic cold-loving fish of the cod family. It is most common in the North Pacific (Bering Sea, Alaska Bay, Monterey Bay). For the last 10 years, the annual pollock fishery is about 3.5 million tons, occupying a leading position in the global fisheries, providing fish products, including such networks as McDonald’s, Nordsee.
First reason
Pollock is a "wild" fish. It is not grown artificially on farms. This fish lives in cold waters (from +2 to +9 °C), preferring depths from 200 to 300 meters. Pollock feeds mainly on planktonic crustaceans. As the pollock grows, it begins to feed on larger prey, namely small fish (capelin, smelt) and squid. Due to this marine diet, pollock has high nutritional properties and at its relatively low cost is not much inferior to more expensive varieties of fish.
Second reason
Peeling of the skin, dull hair and brittle nails are often the result of a lack of nutrition of protein, vitamin A and fat. After all, the main element of hair and nails (keratin) is protein in its structure. Therefore, to update it, you need protein intake from food. Its rather high content in pollack with low caloric content allows to solve this problem. Pollock roe extract, some companies use to create cosmetics. The high content of protein and vitamin A helps maintain skin youth, improve its regeneration, collagen synthesis, provide antioxidant protection, and (according to some authors) normalize hormones.
Third reason
Pollock, like all cod, belong to dietary products, it is useful to eat all people, both young and old. 100 grams of pollock contains only 110 calories and 23 grams of protein. Regular consumption of pollock will normalize the level of sugar in the plasma, as well as improve memory, concentration and give energy. A huge advantage is the presence of cobalt. The trace element is responsible for carbohydrate metabolism and blood formation processes. Without it, the normal functioning of vital organs is impossible. And there is iodine in pollock, it supports the work of the thyroid gland, is responsible for the functioning of the endocrine glands and contributes to the growth and development of the child’s body. The Ukrainian Association of Nutritionists also recommends including pollock with your diet.
Fourth reason
Probably there are no more people who would not hear about the healing properties of omega-3 polyunsaturated fatty acids. Despite the fact that pollock is a dietary and treat lean fish, 100 grams of pollock fillets contain 1.2 grams of fat, 600 mg of which are omega-3, which are essential for the heart muscle, prevention of cardiovascular diseases , lower bad cholesterol and free radical removal to prevent premature aging of the body.
Fifth reason
The catch of pollock is carried out taking into account rational and eco-friendly fishing, thereby preserving the stocks of high-quality fish for future generations. International organizations, in particular, such as NOAA (National Oceanic and Atmospheric Administration), strictly control the catch of pollock, which excludes its overfishing. The main countries that catch pollock are the United States and Russia. Japan catches much less and South Korea quite a bit (fish and seafood from the Russian Federation are not supplied to the Ukrainian market due to an official ban since the end of 2015).
How to choose pollock?
Give preference to dry freeze pollock fillets or pollock briquettes, then during defrosting, the process of which should take place at the minimum positive temperature (preferably in the refrigerator for several hours), you will have a minimum of water at the exit, and the fish meat will retain its structure and maximum of its nutritious properties.