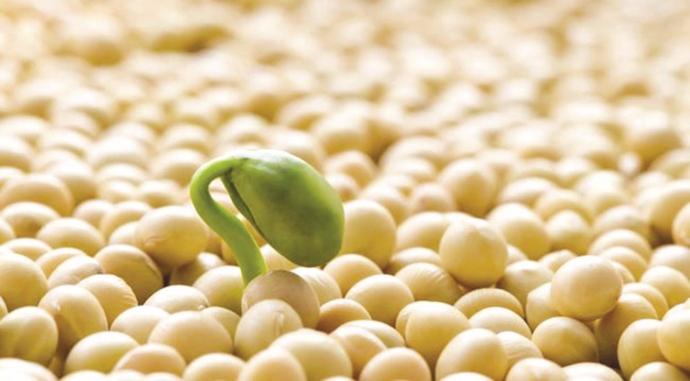 Salmon feed from Norwegian producers contains about 25 percent soy protein. All soy that is imported for fish feed production is certified by an international sustainability scheme.

Soy is used in animal feed, human food, consumer goods and biodiesel. As soy gives more protein per hectare than other cultivated crops, it is a common ingredient in many products all over the world. The Food and Agriculture Organization of the United Nations (FAO) predicts that soybean production will double by 2050. The main reason for the increasing demand is the growing meat consumption. Approximately 75 percent of the world's soy is used in animal feed, especially for poultry and pigs. In Norway, however, 70 percent of the imported soy is used in fish feed production. The aquaculture industry therefore has a responsibility to make sure that the soy has been produced in a sustainable manner.

Nowadays it is difficult to find land where soy can be cultivated. In the last few decades, rainforests, plains and savannas have been converted to soy plantations. This has had negative consequences for the ecosystem and for the population in affected areas, leaving a high carbon footprint. Certification schemes for sustainable soy production make sure that the increased demand for soy does not destroy the rainforests.

There are two certification schemes for sustainable soy production.

In 2006, the soy industry, civil society and financial institutions founded the Roundtable on Responsible Soy (RTRS), with the goal of establishing an environmentally responsible soy production. The standard for responsible soy production was introduced in 2010. The standard states that it is prohibited to convert virgin forests or areas with a high conservation value to cropland. It also ensures fair working conditions and regulates the use of pesticides on soy plantations. Soy manufacturers are certified by independent inspectors.

The ProTerra standard for sustainable and traceable agricultural products was established in 2005. It is based on UN's Universal Declaration of Human Rights and the Convention on the Rights of the Child, the ILO guidelines, the SA 8000 standard, EuropGAP and Global GAP. ProTerra calls for protection of the Amazon and other areas with a high conservation value. It also demands compliance of labour rights and respect for the local communities, indigenous peoples and smallholders. Companies can certify themselves under the ProTerra standard. It is mainly used by manufacturers who use soy in their value chains.

About two percent of the world's soy is certified by one of these two standards. Most of this share is used in global fish feed production. In October 2015, Norwegian feed producers stated that they are committed to use sustainable soy. They created The Norwegian Roundtable of Sustainable Soy, a forum for sustainability and protection of the rainforests.

Norwegian fish feed contains about 25 percent soy. Soy is a source of protein, and it is imported as soy protein concentrate. Soy is used instead of fishmeal, as the fish used to produce fishmeal was at risk of becoming endangered. Read more about fishmeal here [internal link]. In 2014, Norwegian fish feed manufacturers imported around 646,000 tonnes of soy.

All soy products in Norwegian fish feed are RTRS or ProTerra certified. Feed manufacturers also follow the European Feed Manufacturers' Federation (FEFAC) open industry standards, which are based on international certification schemes. These schemes have standards for environmental responsibility, protection against deforestation, emissions and erosion. Basic labour rights for farmers, workers and indigenous people must also be respected.