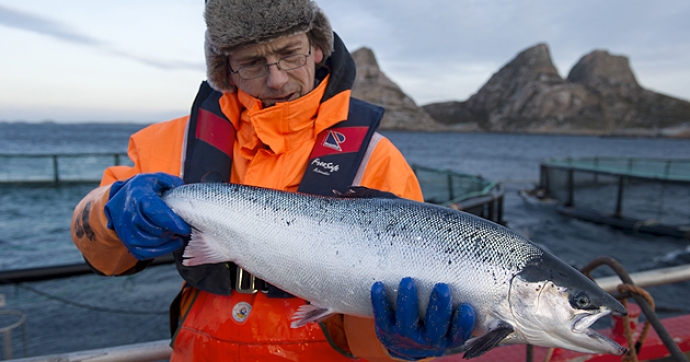 About 14 million portions of Norwegian salmon dishes are prepared daily in about 150 countries around the world. Norway has long been a recognized leader both in traditional fisheries and in the artificial cultivation of this valuable fish. Despite the obvious successes, she, like other major manufacturers, could not avoid problems. Norwegians try to solve them with the help of strict regulation and the latest technologies. Which ones?

Salmon in the world cut

In Norway, salmon farming started in the 70s of the last century. In addition to her, aquaculture is actively engaged in Chile (world number two), Canada, Britain, China, the United States and other countries. Today, salmon farm products have almost supplanted the traditional Atlantic salmon fishery and account for 99% of global consumption.

If it were not for aquaculture, experts are convinced, salmon, following the example of black caviar, would turn into a rare delicacy for very wealthy gourmets. And thanks to artificial breeding, it became everyday food for most residents of developed countries. In Norway itself, if they sometimes say about the deficit, it is not about the availability of affordable fish, but the shoreline, suitable for the construction of new farms.

By the way, salmon farming is the most effective way of obtaining products containing animal protein. For a gain of one kilogram of live weight, about 1.2 kilograms of feed is needed. In the production of pork, this figure reaches three kilograms, and beef - as many as eight.

With all the attractiveness and relevance of the industry, Norway in 2016 was forced to reduce the production of salmon products. According to The Financial Times, for the first time ever the production fell by 5% at once.

As a result, prices for Norwegian salmon have risen to a record 80 EEK per kilogram. And although there has been a decline to 60 kroons since then, it is still unusually expensive for Norwegians. To be more precise, according to the current exchange rate, NOK 100 is equivalent to approximately USD 12.25. And the average monthly salary in the country, according to the latest data from the Central Statistical Office of Norway, was 43.3 thousand kroons ($ 5,300).

The fall of production and the price jump of last year, the British edition explains by the earlier capture of the grown fish, which did not manage to gain the necessary weight. And he, in turn, became a forced step to rescue salmon from his most insidious natural enemy.

In this case, according to the Minister of Fisheries of Norway Per Sandberg, if last year Norway raised about 1.3 million tons of salmon and trout, then by 2050 it is planned to increase this figure to 5 million tons.

The health and even life of the popular commercial fish is threatened by Lepeophtheirus salmonis, a crustacean from the sub-class of copepods. He is better known by the unappetizing name "salmon louse". A centimeter pest inhabits the skin and gills of the salmon and feeds on the body covers.

The fish attacked by the parasite loses weight, becomes vulnerable to infections, it breaks the salt balance, not to mention the loss of presentation. The salmon louse is dangerous for a wild salmon population. However, the threat is repeatedly increased in aquaculture due to the crowding of fish in the marine cages.

For a long time in Norway (and in some countries it is still done), chemicals were used to exterminate parasitic crustaceans. But there were two problems at once. Poisoning substances, falling into the water and killing a salmon louse, inevitably penetrated the body of the fish. Secondly, Lepeophtheirus salmonis was able to develop resistance to most of the substances used. In other words, chemicals simply stopped working with the same efficiency.

The rest of the tried-and-tested methods also showed their inconsistency. So, even the most sparing methods of mechanical cleaning led to increased mortality of fish.

Now the latest technologies have come to the salmon producers in Norway. The Financial Times writes, in particular, about the "futuristic" pen for salmon, to which the Norwegian industry leader, Marine Harvest, was involved. The structure is an object of ovoid shape and 44-meter height. And the company SalMar owns an underwater structure, which, with its outlines and dimensions, resembles a supertanker. The purpose of these non-standard "cages" is to immerse the fish in such a depth that the salmon louse will inevitably die.

Another progressive technology is mentioned in the publication on the Spire traffic portal, which is struggling to preserve natural resources. It is about the use of natural nurses - fish-cleaners from the family of the Guava. For them, the salmon louse is a desirable and tasty food.

Against this background, catching young animals, to which the parasitic crayfish has not yet managed to inflict much damage, looks like a really temporary measure. Moreover, starting from this year, it will cease to be the solution to the problem. Under the new regulation, licenses for the construction of salmon farms will now be issued only in those regions of Norway where the threat from the Lepeophtheirus salmonis will be able to be kept under strict control.

Vaccination instead of antibiotics

Like any living organisms, fish are also prone to infectious diseases. For example, one of the most common ailments of salmon is viral anemia. The danger of epidemics is again sharply increasing in marine cages.

Traditionally, antibiotics are used to treat and even prevent diseases of grown salmon. And in considerable quantities. However, the Norwegians made a real breakthrough in this respect. Since the early 90s, the use of antibiotics in Norway has fallen by 99%. During the same period, production of salmon increased more than 20-fold - from 50,000 tons to over a million tons.

The problem was helped to solve effective methods of vaccination and use of proven probiotics and immunostimulants in feed. As a result of the epidemic went into a recession, and by today, through treatment with antibiotics is only 1% of all grown fish. The kilogram of live weight of salmon in Norway is 0.00034 grams of antibiotics. For comparison: per kilogram of chicken meat produced in the US, there are 1 gram of antibiotics.

After a forced course of therapy, the Norwegians place the salmon in quarantine until the potent drugs are completely removed from the body. For processing and counters of shops absolutely safe fish gets to.

To test the health of salmon, modern monitoring and diagnostic methods are also used. One of the world's largest manufacturers, Cermaq has implemented a technology that allows you to scan virtually every individual. In addition to Norway, the company conducts business in Chile and Canada. In 2014, it was sold to the Japanese Mitsubishi Corporation for $ 1.4 billion. However, all management is still Norwegian.

And more about medicines, but in a slightly different plane. To obtain an attractive color of salmon meat, Norwegians use astaxanthin, obtained exclusively from natural sources. This drug is called the "king of carotenoids" - natural pigments.

By the way, astaxanthin, obtained from microalgae Haematococcus Pluvialis, is widely used as a food additive by companies such as Swedish Oriflame or American Healthy Origins, since it has unique properties - it has 65 times more antioxidant effect than vitamin C, and 14 times stronger, than vitamin E, and also does not allow the deposition of plaques on the walls of blood vessels, thereby reducing the risk of heart attack and stroke, and lowers cholesterol.

About the benefits of standards

The highest quality of grown salmon is helped by the introduction and strict adherence to the strictest standards and regulations. In Norway, as they say on the portal salmonfacts.com, three ministries - agriculture, industry and fish breeding, as well as healthcare - are responsible for the development of new rules and control measures.

In particular, under Norwegian law, 97.5% of the volume of marine cages should be occupied by water, and only 2.5% - fish. The fenced areas for growing salmon are 200 meters in diameter and 50 meters in depth. Such "reservoirs" and cages call it a language does not turn.

When laying new farms, authorities are required to take into account the direction of the sea currents so that fresh water can flow into the fish cages without hindrance. And all the natural waste would be carried to the open ocean.

Literally everything is regulated, including the frequency of checking the state of water and veterinary control. A whole set of rules is devoted to the quality of feed. For example, the maximum permissible antioxidant supplements are set. They are included in the diet of cultivated salmon to preserve the quality of the fish during transportation. Recent control measurements have shown that the content of antioxidants in adult fish from Norwegian farms is well below the permissible level established in the EU.

And, perhaps, the final touch. All workers involved in aquaculture - from management and farm personnel to veterinary doctors and logistics specialists - receive specialized training. And every five years they pass a mandatory course of additional education.