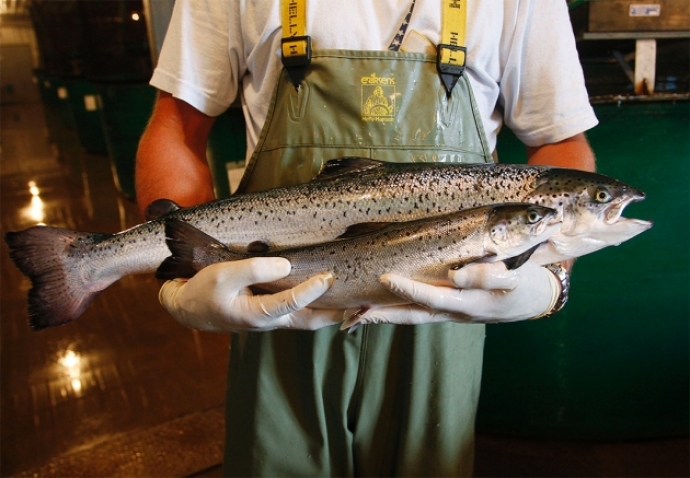 In the fall of 2020, the first transgenic (GMO) salmon grown at the AquaBounty RAS farm in Indiana (USA), 1000 km from the ocean, will be sold in the United States.
The aquaculture activity produces 2.5 million tonnes of salmon per year, with the main producers being Norway, Chile, the United Kingdom and Canada. Overall, fish farms produce over 50% of all fish we consume. Imagine you have the idea of ​​doubling the growth rate of farm-raised salmon with simple genetic modification, which can cut the growing time in half, to 18 months versus 36, using fewer resources.
Imagine doing every possible test for over 20 years to show that the only difference between transgenic and non-transgenic salmon is their growth rate. There are no organoleptic differences (taste, structure) or changes in the composition of the meat, and there are no problems with its consumption. Let's assume that you also carry out all the necessary biosafety tests to confirm that the production is sustainable and environmentally friendly.
Imagine that you have finally received the official approval to produce and market this GM salmon. Now imagine it all started in 1989 and you had to wait 31 years to bring this biotech product to US consumers, which is likely to happen this fall.
Back in 2015, the Food and Drug Administration (FDA) authorized the production and consumption of genetically modified salmon. The FDA has been doing research for several years. As a result, the FDA determined that the salmon produced by AquaBounty Technologies is safe to eat and "will not have a significant impact on the environment." This was the first time that a regulator approved the use of genetically modified animal products.
What is the difference with "regular" salmon?
The transgene, which was microinjected into the embryos of the Atlantic salmon (Salmo salar) in 1989, was called opAFP-GHc2 and consisted of three DNA fragments obtained from other fish: the bottom Atlantic eelpout (Macrozoarces americanus) and the Pacific chinook salmon (Ononcorhynchus tshawytshawyts). As a result of an interesting genetic construct consisting of AFP (antifreeze protein) and GF (growth factor), fish, which usually only grow in spring and summer, continue to gain mass all year round. These innovations do not affect the final size and nutritional value of salmon, but they significantly reduce the time required for breeding - up to 18 months instead of 36, with lower feeding costs (25% of the cost of feeding non-GMO salmon).
Farmed (farmed) salmon is a very profitable food
Salmon offers one of the best food conversion factors. For every kilogram of feed, one kilogram of salmon is produced. For comparison, every kilogram of chicken requires two kilograms of feed, and for every kilogram of beef, about ten kilograms of feed. Salmon also consume relatively little fresh water. A kilogram of salmon requires 900 liters of water, and one kilogram of rice requires 3,500 liters or up to 15,000 liters of water per kilogram of beef.
Finally, the carbon footprint of salmon farming is ten times lower than that of beef production (2.9 kg CO₂ per kg of salmon produced versus 30 kg CO₂ per kg of cow meat).

According to FAO, the need for food production for a growing world population will double by 2050, when the planet is expected to have nine billion people. Traditional agriculture, livestock and fish farming will not be able to produce all the food they need. This is why it is necessary to use biotechnology for both plants and animals.
World news