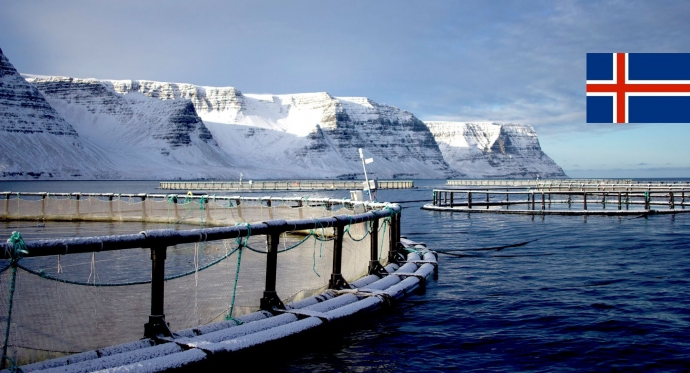 In 2017, only two companies harvested salmon in Iceland - Arnarlax and Ice Fish Farm. In 2018, there were already four such organizations. And in 2019, the managing director of the Icelandic Aquaculture Association, Kristjan Davidsson, expects an increase in red fish production to 20 thousand tons.
Already, the total value of exports of aquaculture products in Iceland has increased by 60% compared to the level of 2018.
At the same time, in the next two years it is expected to double production volumes of commercial aquaculture products. It is assumed that the share of supplies of farmed fish abroad will approach 3% of the country's total exports in monetary terms. In 2021, the island state’s aquaculture export value is expected to be $ 322 million, Iceland Review reports citing a press release from the Icelandic Ministry of Finance and Economics.
This will be possible due to the fact that the salmon farmers of Iceland were allowed to double production: grow up to 85 thousand tons per year. However, it will take about two years to achieve this indicator.
According to Kristian Davidson, the country's salmon growing business is undergoing the third stage of development. Farmers have good access to capital and knowledge, and a number of experienced Norwegian companies are involved in the process, such as Norway Royal Salmon (NRS), Salmar, Måsøval Fiskeoppdrett and Midt – Norsk Havbruk.
He added that Icelandic aquaculturers are going to overtake the Faroe Islands in terms of salmon production (while the Faroe farmers grow about 70 thousand tons per year).
It is expected that it will not be difficult for companies to find buyers abroad, since new markets are opening up for Icelandic salmon, including in China.
Indicators are expected to continue to increase even after 2021. However, the Icelandic Environmental Protection Agency has set limits on the volume of farmed fish in some fjords, and many water farms are approaching these limits.
It should be noted that in Iceland, the aquaculture salmon business faces resistance from wildlife advocates and fishermen. In addition, now it is allowed to grow red fish only in several regions of the country - mainly in the western fjords.
World news